â€œItâ€™s the wild colour scheme that freaks me,â€ said Zaphod whose love affair with this ship had lasted almost three minutes into the flight, â€œEvery time you try to operate on of these weird black controls that are labelled in black on a black background, a little black light lights up black to let you know youâ€™ve done it. â€
â€• Douglas Adams, The Restaurant at the End of the Universe

I was helping someone remotely ‘learn’ how to use their upgraded phone today. It was someone older that hasnâ€™t used a smartphone before. They were finally making the transition from a much more ‘phone-like’ mobile to something a little more up to date. They couldnâ€™t find the buttons.

Black buttons on a black phone are hard to see.   Donâ€™t get me wrong, for someone the right age and in good lighting and with some attention, they can be found. But eliminate just one or two of those variables and itâ€™s not as obvious.

Do you know what else they call all that black on black?   Stylish.   F’n stylish.   See Item 2 below.

Computers used to be fast, efficient and responsive.   We built more power into them so they ran commands faster and were quicker to return to that welcoming blinking cursor at the command prompt.    Do you remember the “Ready” prompt?  The computer raced off to do your bidding and return as quickly as possible to do more.   The faster the “Ready” returned, the more progress we were making.

Today computers and phones (being the most likely computer humans will own going forward) are not designed that way.

They are designed for a population that largely wants a box they can learn to push the buttons on. “I push this, it does this. Why isnâ€™t really important as long as itâ€™s consistent and I can learn over time.”

So what passes for modern design criteria?

1.  Functions should meet ‘mass expectations.’   If your device avoids a basic level of not-working and you can convince a large enough group that it works ‘acceptably’, then it is ‘good design.’   Most functional design goals can be brushed away with ‘good enough’ design. Maybe we can thank the MBAs for that.    See 3.

2.  It must look pretty.   It must have style.  While holding the product, other people must think you are a “good human”.   “Better than” the observer is optional but we must certainly avoid “less than” the observer.   If a celebrity will hold your device, all the better.   People frequently think celebrities are ‘better humans’ and will seek to emulate them through product acquisition.   See 4.

3.  Try not to make the users feel dumb unless you can convince them to blame themselves.   See point 1.

4.  Owning the product should also make a person feel better about themselves personally.   In a post-Nietzsche world self-esteem is harder than many predicted. That’s where ‘feel good’ products come in.   If you feel better about yourself by owning the specific clothing, car, phone, jewelry, etc. that is an acceptable esteem foundation.   It has a high decay rate and requires additional purchases to maintain, but that works for the producers so all is well.   See 1 and 3.

There’s a corollary to 4, that involves ‘selling NEWness’ otherwise people could locate and acquire truly excellent products with low decay rates and hold them for extended periods while enjoying them.   Some still try. Silly humans.

Itâ€™s also somewhat necessary to drive society toward more and more ephemeral forms of meaning like Hollywood, television, the formula driven music industry as well as scripted and well story-arc’d pseudo-news.   All of this helps sell repeated consumption.

All of this erodes good engineering, but then again I am completely biased.   People originally looked at what engineers came up with and said, “It’s too complex and I don’t understand it.   I feel dumb and it’s the engineer’s fault (see 3).”   Your product makes me feel bad about myself and I don’t think it’s my fault.  That is quite bad for sales, so we avoid that.

That’s in some way where Steve Jobs came in.   He’s not the start of this particular story, but is one of it’s most celebrated Cardinals in the Church of Design. Hell, maybe he was pope?

I think I’ve finally killed InksEnd. The last migration seems to have unlinked all my previous blog posts. I suspect that means I’ll have to do some work on it. Oh, well.

Â Â Â  I wouldn’t call it love-hate.Â  My relationship with the worlds most ubiquitous social network is a bit more complex.Â  I consider Facebook’s history around data privacy and Mark Zuckerberg’s public statements about online identity to be a warning.Â  In short, anything you or I expose on Facebook is inventory and Facebook has a history of changing the rules about who gets inside the warehouse, how easy it is to find our information, and which doors are well or poorly locked.

As long as you understand that, it’s a great tool.Â Â Â Â

It’s within this context, I occasionally find friends and family posting things like this:

I’d like to keep my FB private except to those I am "friends with". So if you all would do the following, I’d really appreciate it. With the new FB timeline on its way this week for EVERYONE, please do both of us a favor!

Hover over my name above. In a few seconds you’ll see a box that says : "Subscribed". Hover over that, then go to "comments and likes" and UNCLICK it. That will stop my posts and yours to me from showing up on the bar side for everyone to see, but most importantly it limits hackers from invading our profiles.

If you re-post this I will do the same for you. You’ll know I’ve acknowledged you because if you tell me that you’ve done it I’ll "like" it …. Thank you.

Don’t get me wrong, I absolutely love it when someone takes the initiative to consider how their personal information is shared online.Â Â  It’s especially important to me since the very nature of Facebook means that my privacy is in the hands of every one of my friends (or specifically those I grant access to with lists), it’s a good sign when someone thinks about and takes action to secure their data online.Â Â  It takes one friend with a stolen password and anything I’ve shared is at risk.

However, this particular warning is misleading and the steps taken don’t change your effective privacy.Â Â Â

The key feature of the Ticker is that you see things you can already see on Facebook, but in real time.

In the example below, Rob is a friend of Shawn, but Clair is only friends with Rob.Â Â  Rob notices that Shawn’s updated his status earlier with a funny quote and "Likes" it.Â Â  If Shawn has NOT restricted access to his wall and left it open to the public, anyone on Facebook can see that Rob Likes Shawn’s comment.Â Â

It’s under these circumstances that Clair will see her friend Rob’s activity.Â Â  If she’s looking at Facebook when the event happens (remember the Ticker is real time) then she’ll see an update "Rob Liked Shawn’s Status" with a link that she can follow.Â Â

Keep in mind, Shawn has left his Wall open to the public and Clair could have gone there on her own and seen Rob’s activity.Â Â  For that matter, I can go to Shawn’s Facebook page and view the same update and I’ll see that Rob Likes the update.Â 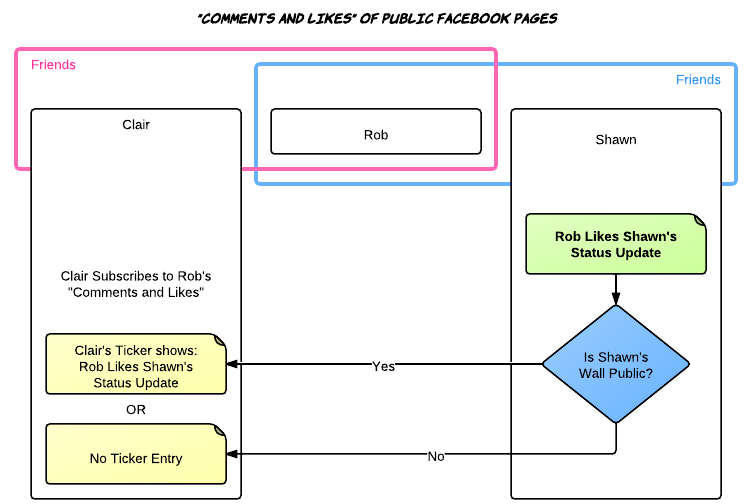 If Shawn is a bit more cautious and has restricted access to his updates to Friends Only (or even specific Lists), then only Shawn’s friends will see his update.Â Â Â  Clair will not be notified that Rob Likes Shawn’s update.

It all goes back to the original source restrictions.Â Â  From Facebook help:Â

Remember: People can only see the posts, comments and likes that you share with them. So if you share something with friends, only they will see it in ticker

Remember, your comments and likes are only visible to people who can see the original post. For example, you might comment on a photo one of your family members posts just to family. A friend of yours who cannot already view the photo will not see a story in ticker about your comment.

So the post I keep seeing can be rewritten:

I’d like to keep my Facebook "Comments and Likes" private.Â  Unfortunately some of my Friends leave their pages open to the Public and you might see some of my activity onÂ  these Public pages.Â Â

I’d prefer you not see that so I’m asking you to unsubscribe from my "Comments and Likes" in your Ticker.Â Â  This won’t change the visibility my activities on these pages, it just means you won’t see it unless you go directly to the page.

So, if you’re tired of seeing what I’m up to in your Ticker, hover over my name above. In a few seconds you’ll see a box that says : "Subscribed". Hover over that, then go to "comments and likes" and UNCLICK it.

That will stop my posts and yours to me from showing up on the bar side for everyone to see, but most importantly it limits hackers from invading our profiles.

If you re-post this I will do the same for you. You’ll know I’ve acknowledged you because if you tell me that you’ve done it I’ll "like" it …. Thank you.

I’ve struck the second to last line as well.Â Â  I can’t find a way to re-interpret it accurately.Â Â  This isn’t about keeping hackers off your profile, but more of an attempt to compensate for pages left too Publically exposed or perhaps the desire to separate activity between groups of friends.Â Â  I’ll discuss the later in a separate post on using Facebook Lists.

Rarely does a month go by before someone I know asks me about basic security software for their home PC. Usually it’s at the right after their pre-installed anti-virus expires or when their college age children bring the laptop home.

In the past I’ve purchased McAfee and Symantec products (usually to extend my own pre-installed version), but for the last several years I’ve relied almost exclusively on free software. There are hundreds of articles from experts on the relative benefits of one package over another, but I tend to rely on millions of my closest friends, “the crowd“, and Cnet’s download site. A quick trip to Cnet and a search on “anti-virus” quickly takes me to a list I can sort by “Most Popular.” At time of this post, roughly 230 million people have downloaded “AVG Anti-Virus Free Edition.” There are several other very good free tools there as well. I like SpyBot for its scanning tool as well as the ability to tweak startup settings withing Windows.

So moving my domain wasn’t as simple as I thought.Â Â Â  Of course, putting a little time into it might have helped (instead of treating it like a take out order).